So, like I said in my previous post, my first order of business as my own boss was to go on vacation…

…And go on vacation I did!

It wasn’t anywhere exotic or anything, but it was a 3-week trip back to my most favorite city in the world – sweet home Chicago. 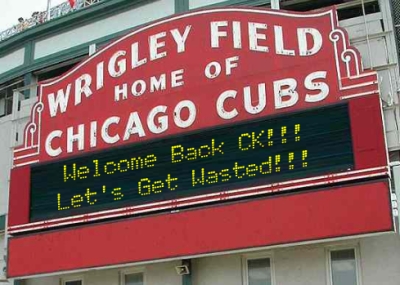 I left the OC on Wednesday, June 27… and it took me a bit longer than normal to get to Chicago. My flight on JetBlue out of Long Beach was supposed to take off at 10:35a (PDT). Everything seemed to be on schedule, but after everybody boarded the plane, we found out that we’d have to sit for about an hour before we could take off because of weather delays in Chicago. Luckily, JetBlue carries DirecTV on their flights, so I was able to channel surf for a bit.

We finally took off about an hour later and everything seemed to be going fine until we approached Chicago. Apparently, because of all the air traffic and weather delays, we couldn’t land. So, we circled Chicago for about an hour and still weren’t able to land. Since we were running out of gas, we detoured to Milwaukee to fill up. We sat in the plane in Milwaukee for about half an hour until we had the green light to land at O’Hare.

The flight from Milwaukee to O’Hare took just 23 minutes and we finally landed at around 8p (CDT). I was supposed to land at 4:29p (CDT)!

Anyway, here’s the quick rundown of what I did while I was in Chicago:

Wednesday, June 27 – Landed in Chicago, met up with Obed at his hotel at O’Hare, we cruised to Ali’s in Buffalo Grove where I stayed for most of my trip, Hahn was there with a case of Coronas, we all had a few beers and caught up on things.

Thursday, June 28 – Chilled and went for a long run (because I got lost) while Ali was at work. At night, we hit up Redmoon in Arlington Heights where we met up with Ali’s Nordstrom crew.

Friday, June 29 – Worked out at with Ali at his gym in the morning and then chilled again and went for a run while Ali was at work. At night, we met up with Davey at the Elgin Public House, a new bar that Heath manages. We closed the bar and went to Davey and Heath’s place. This is when Dance Party 2000-and-fucking-8 occured.

Saturday, June 30 – Went for a run in the morning and then Obed came over. Ali went to meet up with Ferris’ bachelor party crew, Obed and I went to Corelli’s annual 4th of July BBQ (which obviously wasn’t on the 4th of July). I was able to see a good lot of the SAE crew that I haven’t seen for awhile. Obed and I also ended the night with a ton of real (not microwavable) White Castle Slyders, which I haven’t had for years.

Sunday, July 1 – Woke up at 7:30a (after going to bed around 3:00a) to Ali coming in from Ferris’ bachelor party festivities. The night before, Obed and I were thinking about joining them, but were glad that we decided not to after hearing the stories. You’ll have to ask if you wanna know. 😛 We chilled the rest of the day, Obed went home to entertain family from out of town, Billy and Hahn came over to throw back a few and watch Entourage.

Monday, July 2 – I have no idea what I did on this day… this might be the day Ali and I hit up Jimmy John’s (which I also haven’t had for years) and cruised around in Woodfield Mall… We probably had a few beers somewhere that night.

Tuesday, July 3 – Headed out to the Palmer House Hilton which Obed and I called “home” for the week. Unpacked our gear and headed straight for the Taste of Chicago… which was just two blocks away! At night, we hit up Beerboy’s party at his condo in the South-side where I was able to catch up with more of the SAE crew that I haven’t seen for awhile, watched the fireworks from the rooftop, ended up with Obed and Kartik at Red Ivy in Wrigleyville.

Pictures from July 3 on TheBlackoutBoys.com

Wednesday, July 4 – Went to the Taste again where I met up with Sam, an old high-school friend. Kartik met up with us after work and we also met up with Jess and Mikey Mo. We all went to see John Mayer play and witnessed one of the coolest things I’ve ever seen – for the finale, Mayer was joined by Buddy Guy to play Sweet Home Chicago! That night, we met up with Drake and her crew at Sheffield’s in Lakeview.

Pictures from July 4 on TheBlackoutBoys.com

Thursday, July 5 – Hit up Ohio Street Beach, where Mick and Steve met up with Obed and me to chill and catch some rays. Then we went to the Taste, of course, where we met up with Paul and Kari. Kartik met up with us after work and we all headed to McFadden’s in the Gold Coast. We were joined by Drake’s crew, Ali made it out for a little while, and Zubal arrived just in time for a crazy night.

Pictures from July 5 on TheBlackoutBoys.com

Friday, July 6 – Guess where we went… yep, the Taste. Obed, Zubal, and I tried out some grub and then Kripas met up with us to catch the sounds of Umphrey’s McGee and the Black Crowes. Zubal and I hopped into the obligatory hack circle. At night, we headed to Joe’s on Weed Street for the NFL Live party for my boy, Garrett Wolfe where we met up with Paul, Kari, Mick, Lori, Delaney, and Claire. Kartik and I then bounced to the Tonic Room, Burwood Tap, and Victory Liquors in Lincoln Park with Drake’s crew and Sammy, who I haven’t seen for years, and then we met back up with the rest of the crew at Dugan’s in Greektown.

Pictures from July 6 on TheBlackoutBoys.com

Saturday, July 7 – Went for an excellent run around the Taste, along the lakeshore, around the Shed Aquarium and the Field Museum, through Grant Park, and ending at Millenium Park under the waterfalls, where I cooled off. We took it easy the rest of the day and then crashed the DeeGee birthday party at Elm Street Liquors in the Gold Coast. We capped off the night at McGee’s with Sammy and Drake’s crew.

Pictures from July 7 on TheBlackoutBoys.com

Sunday, July 8 – Finally checked out of the Palmer House, chowed down some excellent omelette’s at Tempo with Zubal and Ali, said our “see ya laters” to Zubal and went back to Ali’s place and chilled. Watched Entourage and Flight of the Conchords at night.

Monday, July 9 – For some reason, I’m not remembering Mondays…

Tuesday, July 10 – DETOX! Made it down to the P’s house in Plainfield, caught up on emails and client work, ate dinner with my dad and little bro (my mom has been in nursing school out here in L.A.), chilled.

Wednesday, July 11 – DETOX! Did laundry, cut my hair, worked out on my good-old home gym, worked on various things online, ate dinner with my dad and little bro again.

Thursday, July 12 – More internet stuff, worked out again, packed up, hit up Fox Valley Mall to pick up a few odds and ends, met up for a great dinner at the Mongolian BBQ in Naperville with my old friend Lindsay from high school who I haven’t seen forever, headed back up to Ali’s place, planned on chilling and ended up at Cubby Bear North where we were hooked up by our boy Nast, who is the manager.

Friday, July 13 – Headed to Obed’s hotel to meet up with him and Pauly, drove together up to Milwaukee for day 1 of Mr. Bill’s bachelor weekend, hit up the Miller Brewery, tailgated at Miller Park, watched the Brewers vs the Rockies, and wreaked havoc on Bar Louie on Water Street.

Pictures from July 13 on TheBlackoutBoys.com

Saturday, July 14 – Day 2 of Mr. Bill’s bachelor weekend: Went paintballing in North Chicago, checked into Obed’s hotel, kicked-off the festivities at Goose Island in Wrigleyville, made an appearance at Merkle’s, and ended the night at Mystic Celt in Southport.

Pictures from July 14 on TheBlackoutBoys.com

Sunday, July 15 – Met up with Shelley (another friend from high school) for lunch in the South-side, went back to my digs at Ali’s where he threw an Entourage party with his Nordstrom crew, barbequed and partied once again when I said I couldn’t/wouldn’t.

Monday, July 16 – Went for a run, worked online most of the day, headed up to Southport to chill with Kartik and check out his new apartment for a bit, went back to chill with Ali on my last night.

Tuesday, July 17 – Woke up at the buttcrack to catch my 7:30a flight back to Cali. Only delayed 15 minutes, this time.

And there you have it! In summary, I probably drank more during those 3 weeks than I did all year! I have no idea how I was standing on some of those days…

I really missed Paula, Beckham, and Stryker… but there were a few things that I didn’t realize I missed until I got back to my home in the OC. First of all, it took me a few seconds to get reaquainted with everything. I got so used to how things worked at Ali’s place – remote control, where stuff is in the fridge, and so on…

Anyway, one of the things I didn’t realize I missed was my TV. The first thing I did when I got home was lay on the couch and turn on the TV. Now, Ali has a nice 46-inch DLP HDTV, but he didn’t get any channels in HD (long story). My 50-inch plasma isn’t much bigger, but the HD picture makes a world of difference. I love TV.

The other thing I didn’t realize I missed was my car. After vegging on the couch for awhile, I decided to go out to pick up some groceries. The second I turned the key and heard my Cobra start up, I knew I was gonna cruise around aimlessly with the top down for a little while.

So, that’s probably enough for now. It was a great trip, to say the least. Many thanks goes out to Ali and Obed for hooking me up with accommodations. It was great to see everybody and I’m looking forward to my trip back in a week! Yep, I’ll be flying back to Chicago on the 31st for the first of 4 weddings in the span of 6 weeks! Mr. Bill is up first… 🙂