Huskies, Hold Your Heads Up High!

I think everyone can agree that the first half of the Northern Illinois vs Ohio game was dismal for the Huskies. However, our boys held themselves together and came out roaring in the second half!

An article in the Northern Star sums up the game well:

Despite the first-quarter debacle, the Huskies did pull some positives in the last three quarters of the game.

The NIU offense and defense settled in and outscored the Buckeyes 12-7 in the game’s last 45 minutes.

I also think it would be safe to say that Garrett Wolfe did us all proud. Just missing the cut for the College Football Player of the Week honors, USA TODAY writes:

The Northern Illinois running back had 287 total yards in a 35-12 loss to top-ranked Ohio State. Wolfe rushed for 172 yards and caught five passes for 115 yards. The Huskies’ dynamic back added a touchdown in the fourth quarter when he caught a 4-yard pass from Phil Horvath and dragged Buckeyes cornerback Malcolm Jenkins over the goal line.

The Northern Star also has an article on Wolfe and his numbers: 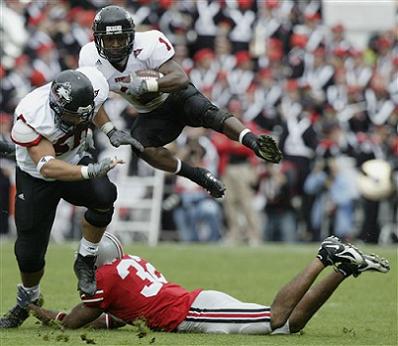 Show your support for Garrett Wolfe in the Wolfe Pack!