I signed up for Klout when it first came out because I’m a sucker for free stuff. If you’re not familiar, Klout is basically a social media service that measures your level of influence across a variety of social networks, like Facebook and Twitter. Your Klout score can range from 0-100 with higher scores reflecting higher levels of influence. Klout also attempts to use your social media actions to collect topics related to you, which in turn are used to determine which perks you are eligible for.

In the beginning, they awarded me with some decent Perks like store credits and discounts. Every once in awhile, I’d be awarded something cool like the Art of Flight documentary and swag, an exclusive preview DVD of the first episodes of Perception, or a pre-screening and party for Argo. While it was great to get all this for free, Klout’s scoring algorithm was a bit sketchy and my profile was connected with some unrelated topics. There was also a lot of blowback about the scores not being anywhere close to the true influence of a user. I’ve never really cared about my score. Just the free stuff, which was becoming less enticing. It didn’t seem worth it to check on my Klout account very often.

Well, Klout has been continually updating their algorithms and they recently updated their website and the entire Perks experience. The service still isn’t anywhere close to being perfect, but it has improved so much that I have started checking Klout about once a day and downloaded the iPhone app so I wouldn’t miss any Perks. 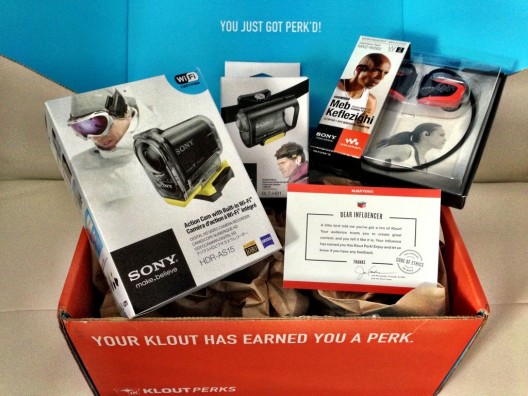 They must have known it was my birthday or something, because these are the coolest Klout Perks ever! This is what I received:

While these aren’t necessarily products I’ve been looking for or would have purchased for myself, they could easily have been on a wishlist of mine. This just goes to show the improvement Klout has made in their topic selection for me.

Have you guys received any cool Perks? I can’t wait to see what I get next!

Sign up on Klout and get rewarded with free Perks!