In addition to creating an awesome World Cup Twitter page, Twitter has created hashflags, which is what they are calling the hashtags that display little flag icons of the countries in the World Cup. The general hashtag for the World Cup is #WorldCup, which produces a little soccer ball icon. 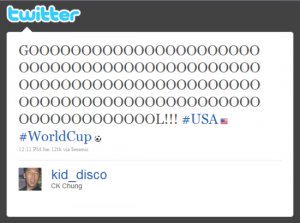 I can’t seem to find a definitive resource for these Twitter World Cup hashflags, so I decided to list them here for my own reference. Maybe others will find it useful, as well!

You can sort the various columns by clicking on the table headers. I will update the table as the tournament progresses so that you may also sort by the teams that have made it through to the second round (2), quarterfinals (Q), semifinals (S), and finals (F).