Over a Week Into Intermittent Fasting

I had always related fasting with religion. I had never thought about it as a lifestyle or in terms of nutritional science. That is until my girlfriend chose not to eat for an entire day.

Obviously, I was curious why she was fasting. That is when she introduced me to the concept of intermittent fasting and Brad Pilon’s Eat Stop Eat. 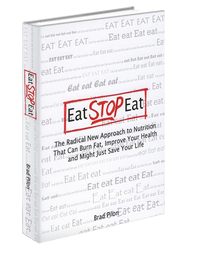 We all know the basic premise of fasting is to abstain from food (and/or drink) for an extended period of time. With intermittent fasting, the basic premise is to alternate periods of fasting and non-fasting. The Eat Stop Eat method suggests one or two 24 hour fasts every week.

I will be creating a dedicated page for intermittent fasting here on my site that will go into more detail on the concept and what it entails. Until then, I just wanted to jot down my thoughts after trying it out for a little over one week…

I normally eat a lot, and frequently. So much so that it’s one of my defining characteristics, and a number of friends exclaimed their bewilderment when I posted my fasting updates on Facebook. I had previously subscribed to the common method of eating many smaller meals throughout the day, so I would normally eat four meals and two big snacks every day. To prepare my mind and body for intermittent fasting, I began by cutting out some snacks and meals.

On Monday of last week, I cut out my snacks. Then, on Tuesday, I cut out my snacks and a meal. So, I got down to three meals, which wasn’t too difficult. Finally, on Wednesday, I went all in for an 18 hour fast! It was not easy. I don’t know if I’ve ever gone more than 10 hours without any food, and that’s including sleep! I was getting major hunger pains around lunchtime, but I powered through. I wouldn’t say I felt “normal” the rest of the time, as I had feelings of hunger throughout, but it may have simply been a matter of being in my head and my body adjusting. Nonetheless, it was manageable, and dinner that night sure was fantastic!

I went on to fast for 16 hours on Thursday and it was a lot easier. Very easy, in fact. Sure, I had some feelings of hunger here and there, but it was a hell of a lot easier than the shock of the first day. I decided to go for another 16 hours on Friday, which was even easier, until I worked-out at the end.

Now, I hadn’t worked-out with weights for three weeks since I was nursing a sprained ankle. While I had been walking and swimming during this time, I chose to take a break from resistance exercises to concentrate on getting my ankle better as soon as possible. So, it’s hard to gauge how my workout after fasting compared to my workouts before. It did seem more difficult, but I also felt like I got more of a “pump” even though I only went through half the workout. I did get a woozy feeling after my workout, but it went away within half-an-hour and it very well could have been because of my recovery drink.

I pigged out (healthily) like normal over the weekend and decided that I will continue with the intermittent fasting on the following schedule:

So, today marks end of my second week of intermittent fasting, and I followed the schedule above. I worked out on Tuesday, finishing the second half of the workout I did on Friday. It didn’t seem as difficult that time, so my workout last Friday may have just seemed more difficult because of my three week break. I did still feel like I got more of a “pump” than usual, though.

I play soccer on Wednesday nights, which is why I scheduled that day as a “pig out” day. Plus, I like having a break from fasting in the middle of the week. Yesterday (Thursday) went by just fine. Today (Friday), I am writing this during lunchtime and I wasn’t sure how I was going to last until dinner, but I feel fine now. I think writing about not eating was making me hungry!

The weight loss aspect of intermittent fasting is for real. I’ve lost about five pounds, so far, which I didn’t want to do. If I keep losing weight, I will have to go a different direction. Moving forward, I will be working out more and concentrating on eating more during the times I can. We’ll just have to see where that takes me.

I plan to stick with the same schedule for now, which actually bears a closer resemblance to the LeanGains method that Brad Pilon points to in his blog. Not to mention, you may have heard about the Warrior Diet which also prescribes a vary similar concept.

On another note, one of the biggest advantages I’ve found to intermittent fasting is the time I save from not having to prepare meals and eat as often. I save around two hours on my fasting days!

If you’re interested in intermittent fasting, I would highly recommend reading Eat Stop Eat. It’s written well and the concept makes a lot of sense. I haven’t gotten too far into LeanGains or the Warrior Diet, so I can’t comment too much on those, yet.