I’ve played bocce on two different occasions over the last week, which is more than I’ve played over the past 3 years!

I love bocce and I like to think that I am pretty good. It didn’t take me long to get back into the swing of things.

Apparently, bocce isn’t as big out here on the West Coast as it is in the Midwest. Back in college, we used to play all the time. I guess you could say that we were (and still are) pretty big into the yard games – bocce, bags, washers, etc…

Over the past weekend, Paula, the dogs, and I drove up to Northern California to get away and hang out with some friends up there.

Though it may not seem as popular as it is in the Midwest, West Coasters take their bocce pretty seriously! The first night, we ended up going to Campo di Bocce, which had four indoor bocce courts… and four outdoor courts – in what I consider the coolest beer garden ever!

If you want to check out the rest of our weekend in NorCal and view more pics, please feel free to visit our website at cKandPaula.com.

On Tuesday, our Ask.com Rep took us out to an Italian restaurant right here in Orange County called Il Fornaio, and they had bocce courts! 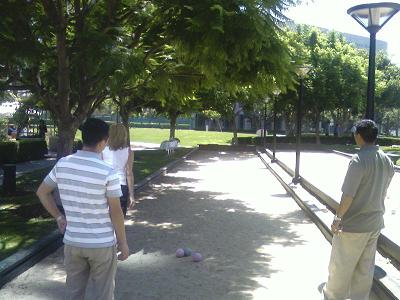 The guys are my co-workers and the girl “bowling” is our Ask Rep. I wrote about meeting our Ask Rep previously and finding out that she is installing a bocce court in her backyard… awesome!

Prior to these two events, I’ve only played bocce in yards on grass and dirt. I’ve never played in actual courts before, so it was a neat experience. The courts at Campo di Bocce featured rubber track-type material which was perfectly even while the courts at Il Fornaio were dirt and a bit less predictable.

I’m gonna need to buy a house with a backyard big enough for a bocce court!